YEREVAN, ARMENIA – NEWSAKTUELL – 23 July 2020 – The European Court of Human Rights (ECHR) has satisfied on 21st July the application no. 54684/19 of the former Minister of Finance of Armenia Gagik Khachatryan, and has published its decision by which it granted an interim measure under the rule 39. The ECHR requested the Government of the Republic of Armenia to ensure immediate medical treatment of Gagik Khachatryan as well as right to be examined and treated by doctor of his choice, including foreign doctors. 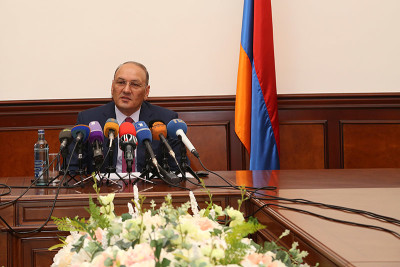 The 64-year old prominent politician who has illegally been detained for already 11 months needs immediate surgery. The failure or delay to perform medical treatment contains serious and irreversible threats posed to his future health and life. Khachatryan’s attorney group has claimed this issue in all competent authorities of Armenia, including the investigation, prosecution authorities and courts of the Republic of Armenia. They have consistently ignored these claims depriving Khachatryan’s fundamental rights to receive an adequate medical treatment. The attorney group has also referred to the Human Rights Defender of Armenia and other human rights organizations, which have voiced their concerns regarding Khachatryan’s case.

“Armenian authorities under government of Nikol Pashinyan refuse to ensure Gagik Khachatryan’s adequate medical treatment. There is no doubt that this is a politically motivated case. We are sorry that even in case of existence of explicit threat to the life and health of the citizen of the Republic of Armenia, we have to ensure the exercise of the right to medical treatment on the request of the European Court of Human Rights” Khachatryan’s attorney Yerem Sargsyan said.

The former Minister of Finance Khachatryan is charged with the abuse of authority and misapplication of property during his post in state activity from 2008 to 2014. Khachatryan does not plead himself guilty for the charges brought against him and his attorney group has voiced dozens of cases of offences and pressure within the last 11 months, including the illegal and out-of-legal-logic prosecution against members of Gagik Khachatryan’s family.

Gagik Khachatryan is a prominent Armenian politician and government official who retired in 2016. While at the office, he was considered as one of the wealthiest government officials in the country according to his annual declarations. After the political changes in 2018, a series of criminal charges were filed against many former politicians. This includes presidents of Armenia, Robert Kocharyan and Serzh Sargsyan and other senior officials. Politically motivated charges have been also filed against the current parliamentary opposition leader Gagik Tsarukyan. Despite the abundance of investigations and criminal cases, there is not a single judicial act having entered into force on any trumpeted criminal case. Instead, the country has plunged into turmoil of bitter debates, fraught with risks of forming unfavorable perception on the domestic stability along with tensions in Armenia-Azerbaijan state border.

AXA Wellness Index 2020: Mental wellbeing takes over financial wellbeing to become the most important factor affecting public’s wellness in HK, Macau and other...

Workforce Agility is the Key to Future Success, say 84% of Companies in Singapore: Aon Survey