HONG KONG SAR – Media OutReach – 17 December 2020 – Large-scale concerts with raving fans may never be the same again. With the support of Microsoft and Cyberport, Hong Kong digital entertainment company Kre8Lab launched “The Show Must Go On”, a brand-new interactive concept that brings virtual entertainment experiences to the public. 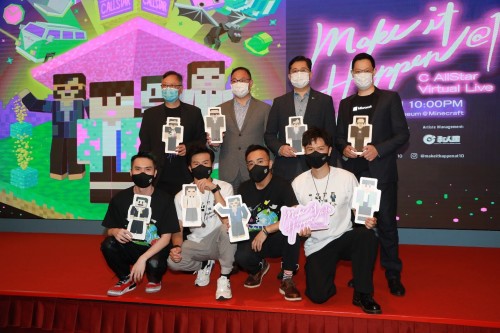 Recognizing the impact COVID-19 has had on the music and entertainment scene, Kre8Lab saw an opportunity to create immersive and virtual entertainment experiences, with open-world game Minecraft as the key. The Kre8Lab team designed and built a performance venue resembling the Hong Kong Coliseum in the game, giving birth to massive potential for virtual concerts.

Built on a robust and secure Microsoft Azure cloud platform, this immersive virtual experience on Minecraft connected fans from all around the world, through a combination of music and gaming.

The Make It Happen @ 10 C AllStar Virtual Live cross-platform online concert premiered in the Minecraft Virtual Hong Kong Coliseum. This event coincided with the 10th anniversary of C AllStar’s debut, transforming them into Minecraft player characters as they performed classic hits from the past decade.

“Under the new normal, industries need to be flexible in adapting to new jobs and lifestyles,” said Kevin Tse, Director, Partner and Business division, Microsoft Hong Kong. “We are excited to see C AllStar using our Azure cloud technology and the Minecraft platform to bring Asia its first interactive virtual concert, coupled with innovative and secure fan interactions through Microsoft Teams. Microsoft will continue to empower the entertainment industry in pioneering innovative entertainment experiences and other possibilities under the new normal.”

Organizers simulated the entire process to allow fans to enjoy the full concert experience — from ticket checks and temperature taking to entering and finding a seat — and reproduced the classic four-sided stage of the Hong Kong Coliseum in Minecraft, including surprise stage effects.

Further elevating the atmosphere was a mass chorus performed by C Allstar together with their fans via the Together Mode feature on Microsoft Teams. Fans involved in the video conference had the opportunity to join in the chorus in the same virtual background, singing along to C AllStar’s iconic songs and creating an unforgettable remote experience together with them.

To familiarize new players with Minecraft games and break away from the confinements of home, the production team of Kre8Lab spent three months crafting the “Super Avenue of Stars” treasure hunt to recreate the streets of Tsim Sha Tsui, including the iconic Clock Tower, Star Ferry Pier, the Hong Kong Cultural Centre, Hong Kong Space Museum, 1881 Heritage and more in the virtual world. On the day of the concert, the organizers invited brands such as FWD House 1881, Reebok, Green Common, Grana, Deliveroo and McDonald’s to set up virtual booths, allowing fans to purchase food and merchandise in preparation for the concert, further heightening the concert atmosphere.

Riding on the success of Kre8Lab’s “The show must go on”, the company recently launched another initiative called ChungDung, Hong Kong’s first interactive virtual singing contest integrating the Minecraft platform with Extended Reality (XR) Technology. This builds on the company’s efforts to engage Hong Kong’s growing population of millennials amid the pandemic through immersive entertainment experiences.

This was all made possible with the combination of mixed reality technologies, live-streaming capabilities of Azure Media Services and the Minecraft gaming platform. Through technology, participants were able to enter the contest with a personalized Memoji and compete in a final round streamed live via Minecraft. Kre8Lab also organized a virtual event management workshop to equip participants with the necessary skills and knowledge for them to host ChungDung’s final show event in Minecraft. The contest has attracted approximately 150,000 views and 5,000 votes online and continues to see engagement amongst users in Hong Kong.

Microsoft (Nasdaq “MSFT” @microsoft) enables digital transformation for the era of an intelligent cloud and an intelligent edge. Its mission is to empower every person and every organization on the planet to achieve more.

More Choice, More Variety for a New Lifestyle at 7-Eleven!