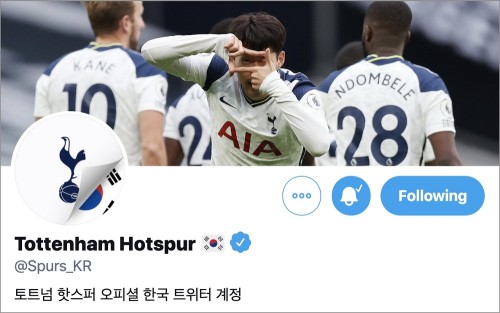 @Spurs_KR) on January 18th and released a variety of exclusive content related to Heung-Min Son. The new Spurs Twitter account will provide fans with a new way to follow the club, including content related to Heung-Min Son, the Tottenham player and Korea National Team captain who has become a global superstar. Some Tweets will be provided in both Korean and English for global fans. Before the official launch, Heung-Min Son posted a Tweet from the new account with a short teaser video, saying in Korean, “Pay attention, everyone!” on January 15th. 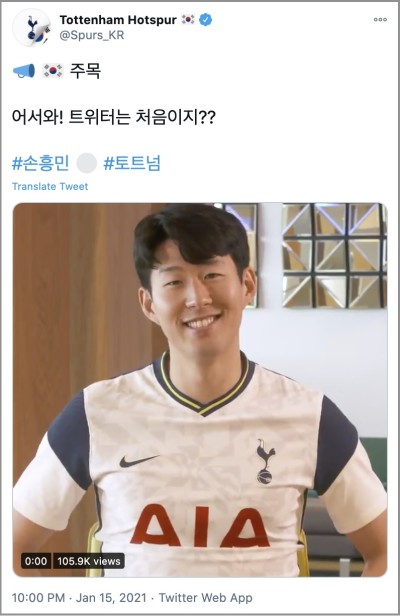 To date, Tottenham Hotspur, the most-watched and best-supported overseas football team in Korea, served its Korean fans through its official Twitter account (

Twitter launched a special emoji to celebrate the opening of Tottenham Hotspur Korea Twitter account. A special emoji designed with Heung-Min Son’s face will be automatically applied to Tweets using the hashtags

#토트넘. Emoji with the hashtags can be used from January 18th to April 18th.

YeonJeong Kim, Head of Global Kpop & Kcontent Partnership at Twitter said, “Twitter is the best place to join the conversations in real time about many different topics. Korean superstars are emerging in various activities globally, like BTS and Heung-Min Son, while keeping their hometowns close to their hearts. Fans want to follow Sonny’s and Tottenham’s latest news without any barriers, and @Spurs_KR will share exclusive contents to connect with fans.”

Heung-Min Son is a captain of the men’s South Korea national football team, and joined Tottenham Hotspur from Bayer Leverkusen in August 2015. In 2020, Heung-Min Son ranked as ‘the most Tweeted athlete in Korea’, as determined by Twitter analysis of Tweets and accounts. On January 2nd, 2021, he scored his momentous 100th goal in the 17th round of the 2020-2021 English Premier League (EPL) against Leeds United.

@SpursOfficial collaborated with Heung-Min Son’s Korean fans for a video congratulating him on his 100th goal, with well-wishers sharing comments like, “So cool!! His 100th goal!!” and “Congratulations on your first goal of the new year!”