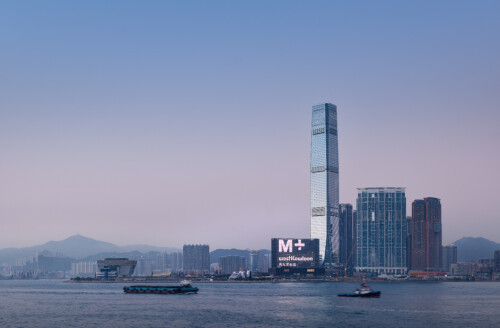 HONG KONG – Media OutReach – 12 March 2021 – M+ has reached the important milestone marking the completion of construction of the museum building. With the Occupation Permit for the museum building obtained on 24 December 2020, M+ is set to open to the public at the end of 2021.

Designed by a global team of the world-renowned architecture firm Herzog & de Meuron in partnership with TFP Farrells and Arup, the M+ building is set to become a new addition to the global arts and cultural landscape and a new international architectural icon. Located in Hong Kong’s West Kowloon Cultural District on the Victoria Harbour waterfront, it provides a permanent space for M+, the first global museum of contemporary visual culture in Asia dedicated to collecting, exhibiting, and interpreting visual art, design and architecture, moving image, and Hong Kong visual culture of the twentieth- and twenty-first centuries.

The commanding architectural form consists of monumental horizontal and vertical volumes–an expansive podium and a strikingly slender tower–reflecting the architects’ reading of the unique typologies of Hong Kong’s architectural landscape and their sensitivity to local urban conditions. Beneath the building site lie the MTR Airport Express and Tung Chung Line. While the pre-existing site condition presents a challenge to design and construction, it has also become a point of departure for the M+ building. The excavation around the railway tunnels produces a ‘found space’ that provides an anchor for the building for hosting dynamic and rotating installations.

The 65,000 square-metre M+ building houses 17,000 square metres of exhibition space across thirty-three galleries. It also includes three cinemas, a Mediatheque, a Learning Hub, a Research Centre, museum shops, restaurants, a tea and coffee bar, a Members Lounge, and office spaces, with a Roof Garden that commands spectacular views of Victoria Harbour. Most galleries are arranged on a large podium level on the second floor offering visitors a fluid, interconnected experience of the exhibitions. The tower defines a visual dialogue with the urban landscape of Hong Kong. The podium and tower are united as concrete structures clad in ceramic tiles that reflect the changing conditions of light and weather while standing out from nearby glass and steel skyscrapers.

Museum staff have moved into and started to activate the M+ building and the Conservation and Storage Facility (CSF). Preparations including environmental stabilisation, space fit-outs, the move of permanent collections, and the installation of collection works and objects have commenced with a view to opening the M+ to the public at the end of 2021.

Suhanya Raffel, Museum Director, M+, emphasises the importance of the completion of M+’s construction journey. ‘This is a major milestone for the museum. As we mark the building completion, our opening preparations are in full swing. We have moved into our permanent home, and I am thrilled to be able to say we can soon welcome visitors from Hong Kong and beyond to M+.’

Jacques Herzog, Founding Partner, Herzog & de Meuron, articulates the ambition for the design and realisation of the M+ building. ‘M+ certainly has the potential to become the major visual culture museum in Asia. It best expresses where we should go as a world culture, where diversity, equality, and access to art of all kinds are expressed from the very beginning. This kind of diversity and broadness is part of the DNA of M+. This makes it a museum that is very much locally inspired, but at the same time universal and open; it is for the people and visitors across the world.’

The MTR Airport Express and Tung Chung Line tunnels lie beneath the site of the M+ building. Excavations around the tunnels reveal a ‘found space’ that provides an anchor inside the building and can host dynamic rotating installations. In a remarkable feat of engineering, five mega-trusses–large steel elements encased in concrete frameworks–help support the massive structure and prevent it from bearing down on the tunnels.

Glass-clad skyscrapers are ubiquitous in Hong Kong. Departing from this visual language but remaining in dialogue with it, the M+ building features ceramic components as a modular facade system. The dark green ceramic facade reflects conditions of light and weather in many different facets and shades –an ever-changing skin with a crafted and rich surface quality. Ceramics also provide a localised environmental solution for the M+ building, to protect it from the long-term corrosive effects of heat, humidity, and wind.

The south facade of the tower is a dynamic, evolving media display screen. It is a visual amplification of M+ programmes and accentuates the museum’s connection with the urban landscape facing Victoria Harbour and Hong Kong Island.

A lightwell inside the building, created by massive cutaways in the floor plates and the skylights, connects basement floors, the ground floor, and the podium level, while offering visitors an immersive experience of the architecture and the museum from above and below.

Multi-purpose spaces of various sizes in the building offer curators and artists a range of possibilities for realising projects. The sweeping Grand Stair auditorium is a place for gathering, a flexible venue for lectures, screenings, and other events.

The Learning Hub is a space for learning, interpretation, and inspiration set against the backdrop of Victoria Harbour. It houses a Forum, workshops, and seminar rooms hosting programmes for all ages and interest groups. The pitched roof of the Learning Hub also provides access to the Roof Garden.

The Roof Garden is located atop the podium. It is an outdoor space that directly connects with the Art Park of the West Kowloon Cultural District and offers sweeping vistas of Victoria Harbour, Hong Kong Island, and outlying islands.

Furniture such as benches, reception desks, and ticketing counters are made from bamboo, recalling the informal structures found throughout Hong Kong.

9. A campus of buildings

The M+ building is part of a campus that also includes the CSF and the WKCDA Tower. The CSF is devoted to the conservation, restoration, archiving, and storage of the growing M+ Collections. The WKCDA Tower is a sixteen-storey building that will house the new head office of the West Kowloon Cultural District Authority as well as retail, dining, and entertainment facilities.

M+ is a museum dedicated to collecting, exhibiting, and interpreting visual art, design and architecture, moving image, and Hong Kong visual culture of the twentieth and twenty-first centuries. In Hong Kong’s West Kowloon Cultural District, we are building one of the largest museums of modern and contemporary visual culture in the world, with a bold ambition to establish ourselves as one of the world’s leading cultural institutions. Our aim is to create a new kind of museum that reflects our unique time and place, a museum that builds on Hong Kong’s historic balance of the local and the international to define a distinctive and innovative voice for Asia’s twenty-first century.

About the West Kowloon Cultural District

The West Kowloon Cultural District is one of the largest and most ambitious cultural projects in the world. Its vision is to create a vibrant new cultural quarter for Hong Kong on forty hectares of reclaimed land located alongside Victoria Harbour. With a varied mix of theatres, performance spaces, and museums, the West Kowloon Cultural District will produce and host world-class exhibitions, performances, and cultural events, providing twenty-three hectares of public open space, including a two-kilometre waterfront promenade.

Established in Basel in 1978, Herzog & de Meuron is a partnership led by Jacques Herzog and Pierre de Meuron together with Senior Partners Christine Binswanger, Ascan Mergenthaler, Stefan Marbach, Esther Zumsteg, and Jason Frantzen. An international team of nearly 500 collaborators including the two Founders, five Senior Partners, ten Partners, and 41 Associates work on projects across Europe, the Americas and Asia. The main office is in Basel with additional offices in London, New York, Hong Kong, Berlin and Copenhagen.

The practice has designed a wide range of projects from the small scale of a private home to the large scale of urban design. Many projects are highly recognized public facilities, such as museums, stadiums, and hospitals, and they have completed distinguished private projects including offices, laboratories and apartment buildings. Awards received include the Pritzker Architecture Prize (USA) in 2001, the RIBA Royal Gold Medal (UK), the Praemium Imperiale (Japan), both in 2007, and the Mies Crown Hall Americas Prize (USA) in 2014.

Arup is a global firm of more than 15,000 designers, engineers, architects, planners, consultants and technical specialists, working across over 90 disciplines, with projects in more than 140 countries.

We opened our Hong Kong office in 1976, and today our influence can be seen everywhere in the city, from its tallest building to its longest bridge, at the airport gateway and through a large share of its sophisticated railway networks, to designing sustainable buildings and planning the next-generation towns.

From the Sydney Opera House and the Centre Pompidou to our more recent work like the V&A Museum Shenzhen and Taipei Performing Arts Centre, Arup has played a defining role in the design and development of some of the world’s favourite cultural buildings.

NTUC LearningHub Survey: Despite More Employers Seeing the Importance in Training in the Wake Of Covid-19, Not Enough Is Being Done to Upskill Workers