Originator of K-pop, SEOTAIJI’s official concert will be live-streamed on Twitter for the first time

SEOUL, SOUTH KOREA – Media OutReach – 18 March 2021 – For the first time, Twitter will livestream a performance by legendary K-pop artist ‘SEOTAIJI’ globally, enabling fans across the world to enjoy his “Quiet Night” concert. Fans can tune in via

SEOTAIJI is widely regarded as the most prominent and influential artist and cultural icon in South Korea, since his rise to prominence as leader of the group ‘Seo Taiji and Boys’ in 1992. Throughout his career from group to subsequent solo, SEOTAIJI’s music and artistry, which included elements of hip-hop, dance, rock, metal and Korean Traditional music (Gukak) were instrumental in influencing the sound of Korean popular music, and helped lead to the formation of the K-pop genre as it is known today. Current K-pop favorites like BTS (

@BTS_twt) recognize SEOTAIJI’s influence on K-pop; BTS has paid homage to SEOTAIJI by covering his song, “Come Back Home (1995),” and also performed at SEOTAIJI’s 25th Anniversary concert, where SEOTAIJI passed them the torch as a globally-renowned K-pop artist. 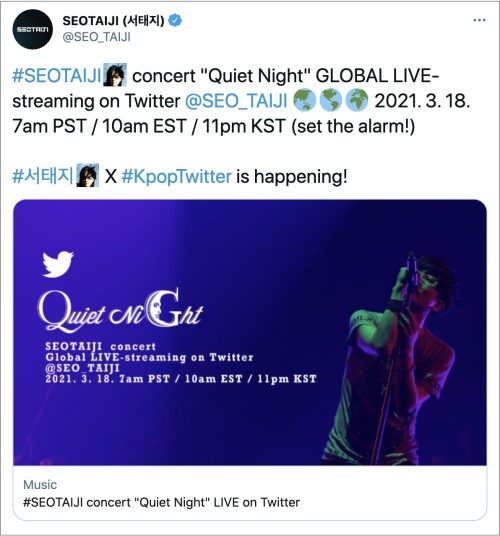 YeonJeong Kim, Head of Global K-pop Partnerships at Twitter, said, “#KpopTwitter has everything fans want to know about their favorite current K-pop artists, but also understands the history of K-pop and how past and present artists influence where K-pop is today. SEOTAIJI is the originator of K-pop music scenes, and artists across K-pop appreciate his contributions to culture – and we want to help fans understand as well. Moving forward, we’re excited to continue partnering with SEOTAIJI to drive conversations about the deep history behind the genre of K-pop.”

SEOTAIJI company said, “It’s really thankful to meet music fans via the concert’s global live-streaming on Twitter. We hope SEOTAIJI’s music could comfort music fans all over the world who are tired of COVID-19.” 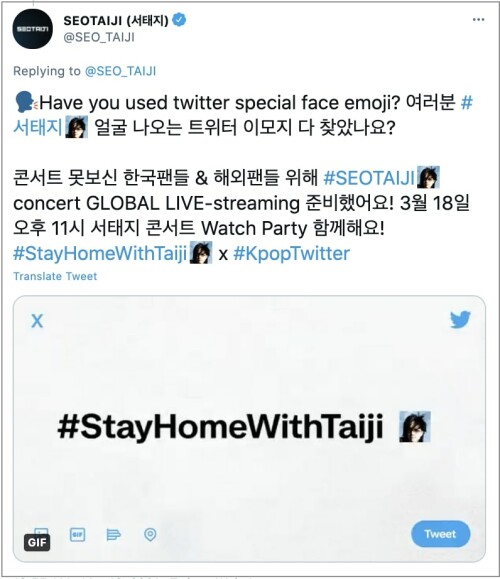 Fans of SEOTAIJI can share their excitement for the concert with a special emoji to celebrate the occasion. Through June 13, SEOTAIJI fans can access the emoji using the following Hashtags:

@SEO_TAIJI) right now to get real-time updates about concerts and more.

Twitter is what’s happening and what people are talking about right now. To learn more, visit about.twitter.com and follow

NTUC LearningHub Survey: Despite More Employers Seeing the Importance in Training in the Wake Of Covid-19, Not Enough Is Being Done to Upskill Workers

2021 skincare solutions just a click away with POND’S Skin Advisor...